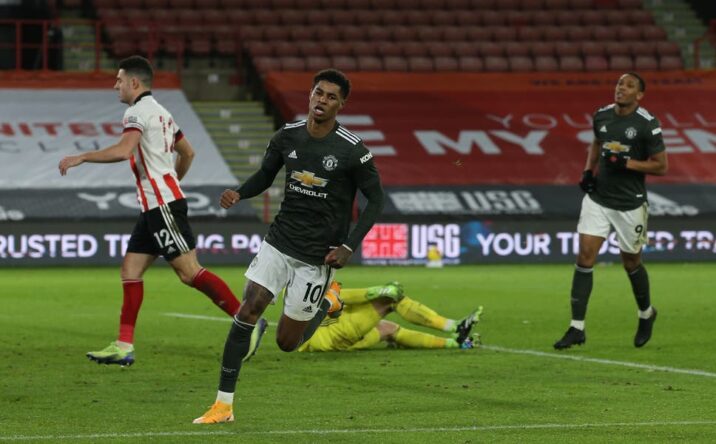 Manchester United managed to win a crucial game against Sheffield United at Bramall Lane. The match finished 3-2 but certainly didn’t show the whole story as United dominated the home team for most the game but two lucky or unfortunate goals narrowed the margin. A poor pass from Maguire put Henderson under pressure and gifted the ball to McGoldrick who tapped in the Blades’ sixth goal of the season. Chris Wilder’s side could have doubled the lead with efforts from Fleck and McGoldrick missing the target. United rallied and earned the lead after wonderful passes finding Rashford and Martial. Both of whom slotted past a helpless Ramsdale for a 1-2 scoreline in the first half. It is the only time both players have scored in the same game this league campaign so far!

Manchester United continued to cause problems and could have had more goals but the defiant Sheffield United backline and Aaron Ramsdale denied them the third early in the second half. Some magnificent team play resulted in Rashford slotting past a more-culpable Ramsdale for the third as Fernandes, Pogba, Martial and Greenwood were all crucial to the sealer. United sat back more and allowed Fernandes and Greenwood to be rested for Mata and Van De Beek late on. Despite the added creativity, a fourth couldn’t be found. Sheffield United got themselves back into the game from a lucky header from McGoldrick and almost equalised with Mousset. However Henderson palmed the ball away brilliantly and just out of Stevens’ reach.

United won the game in a nervy manner in the end but such a massive win for the club. The win distances them with City and Arsenal and leapfrog Chelsea to sixth place with a game in hand. If United were to win this game, they would be just two points from Liverpool at the top and in second place conclusively. Such a big win for United as they have historically dropped points when the rest of the league does post-Sir Alex. Leeds to come to Old Trafford on Sunday and United must be ready.

I think he has not reacted to a bad situation with the goal. Watching it back, Maguire puts him in a bad position where Burke is pressing. However, if he plays it to Lindelof or Matic who were free then there would be no problem. He takes a heavy touch and pays for it. But he bounces back. He was dominant from crosses and his positioning remained very good all game. A magnificent save at the end and he will hope to carry his second half performance into whichever game he next plays in.

He played well and got out of difficult positions well when pinned back. Stopped the overlap from wingbacks, something he has struggled to do. He has to stop narrowing his defensive play and make sure he remains aware of the attacking fullbacks. Especially against Leeds.

Superb play all game. Had a 94% pass accuracy and that is rare for midfielders, let alone defenders! The pass to Rashford was sublime and cannot be understated. Unlucky with the corner as he actually wins the ball but McGoldrick blocks his clearance.

He would have got an eight but the first goal was mostly down to him. Arguably, De Gea would have played the ball quicker or lumped it forward. However the hospital pass Maguire gave Henderson was too dangerous for the England goalkeeper. Other than that he was flawless. Dealt with Burke’s pace very well and dominant in the air as per usual.

Sheffield United tried to overwhelm Telles who is not as defensively solid as Shaw. However the Brazilian handled it very well and kept Baldock at bay. I think it might be the first time we have had two strong competitors at left back since Sir Alex retired and honestly I am loving every bit!

His pace could have been an issue. For the most part he was excellent and his range of passing was exceptional. He got United out of danger and was the silent man in defence. He will need replacing and a young prospect could be brought in as an understudy if McTominay is not deemed so.

Another great performance regardless of the assist. He was dominating in defence, clinical in his passing and got United going with every pass. The assist was magnificent and no doubt that he meant to do it.

Even without a goal or an assist he was brilliant. His linkup play was something to behold and the passing range he displayed was once again world class. First time he has drawn a blank in an away game, doubt that will last long!

I think he did struggle but a decent outing. A couple of shots on goal but offered good width.

One magnificent goal and another on the back of sensational play. You cannot keep this man quiet for long. 12 goals in 16 starts, my word he is improving by the second.

He really needed that goal. Great movement all game and some incisive passes too. Good assist to tee up Rashford. Hopefully this kickstarts his season.

Some good linkup play but missed a glorious chance for another wonderful team goal.

Tidy on the ball but missed two big chances to feed Rashford and Martial respectively.

Slowed the game down and sharp on the ball.

Man of the Match: Marcus Rashford

Had to play two attacking midfielders against a team that would sit back. Perfect tactics and the football his team played was electric and clinical. He would hope for a bigger scoreline. The criticism he gets is mostly agenda based and he has answered a lot of critics from this result. United need to keep going over a busy Christmas period and put pressure on Liverpool ahead of the trip to Anfield in January.