Manchester United produces many great talents, who have made or have the potential to make headlines all over Europe. The perfect example being the famous Class of 92’ graduates, namely Ryan Giggs, Paul Scholes, David Beckham, Nicky Butt, Gary Neville and Phil Neville. All of them were champions and important players for United and went on to win loads of silverware with the club. After their retirement, they have also become successful in the various fields. For example, Beckham is a global icon, celebrity and MLS team owner; Giggs is the Wales national team manager; Phil Neville is the England Women’s team manager; Gary and Scholes are excellent football pundits and co-owners of Salford F.C and finally Nicky is the head of United’s Academy. Current United manager, Jose Mourinho, is not well known for promoting youth in his career but managing United, a club known for his history of youth development, may have made him change his ideology.  Just ask Scott McTominay!
The 21-year-old youngster has had a break-through 2017/18 season with United and is the perfect example of a player who became a somebody from a nobody in the reserve squad. The player has made himself one of the most important players and the go-to-man for Mourinho in the past weeks, when majority of the midfield were either injured or out of form. He gradually became a squad regular with his dynamic performances in midfield and recently made his international debut for Scotland, the side which he represents, having snubbed England. The rise of McTominay justifies that United’s academy is not failing and it produces fine, talented individuals who have the potential to play with the first team and kick-off their careers. McTominay also gives hope for other players waiting for an opportunity to make their mark. Let’s analyse who deserve and who have the potential to make it to the top.
To start things off, we should first know that there are couple of youth players who are already drafted in the first team, but, are getting minimal or no chances to play. Them being Joel Pereira and Angel Gomes.  Joel Pereira, United’s 3rdchoice goalkeeper, is a great talent and highly regarded by Jose. In his case, it is clear that it is a tough life being a goalkeeper at United when you have the best goalkeeper in the world, David De Gea and arguably the best back-up goalkeeper in the world, Sergio Romero, ahead of you in the pecking order. Joel, has hardly played for United this season. His only appearance has come as a cameo in the Carabao Cup and games in the pre-season, along with bench roles during domestic cup games when De Gea is rested. However, Joel is included in all match-day squads only to be used as practice goalkeeper, a principle that Mourinho likes, but doesn’t make the 18-man squad. It is fair to say that at 21, Joel is gradually getting wasted and his talent is not used to the fullest, even though the manager regards his fellow country man highly. Romero too is restricted to only cup games, despite being the Argentina number 1 for obvious reasons, David De Gea. Joel should be given more competitive minutes which he deserves. Considering Romero’s undecided future and should he leave, Joel should be the second in command. The last thing we want is for him to become the next Sam Johnstone and get loaned out to numerous clubs and eventually getting his career ruined before it even starts.

The second on our list is Angel Gomes. The 17-year-old wonder kid is tearing up the footballing world with his maturity and skill with United. He is the main player for the under-18s and under-23s this season. His performances led him to sigh a new deal with club, when the whole world was after his signature, including Barcelona and Dortmund. He is already a member of the first team, having being drafted in all competitions, but never being selected. His only minutes with the first-team came against the 4-0 win over Yeovil Town in the FA Cup, where he came on for Marcus Rashford in the 88thminute and nearly scored seconds after coming on. He also added dynamism in those two minutes which led to two more goals. He is of the best talents in English football and better and more mature than his seniors and team mates at a slender age of 17. He certainly deserves more minutes in the first-team next season. Gomes has scored 5 goals and assisted 4 for the youth side. This is less as compared to his stats last season i.e. 12 goals and 6 assists and 5 goals for the England youth team of which he is the captain.
Next on our list is Tahith Chong. The 17-year-old Dutch wonder kid, set England alight straight after arriving from Feyenoord last season. An excellent dribbler of the ball and deadly finisher, Chong is a natural winger who can play on either wing. His unpredictability and long shots are two of his best qualities. He has impressed at all youth levels and has scored 5 goals and assisted 1, less compared to his 8 goals and 8 assists last season, owing to an injury. 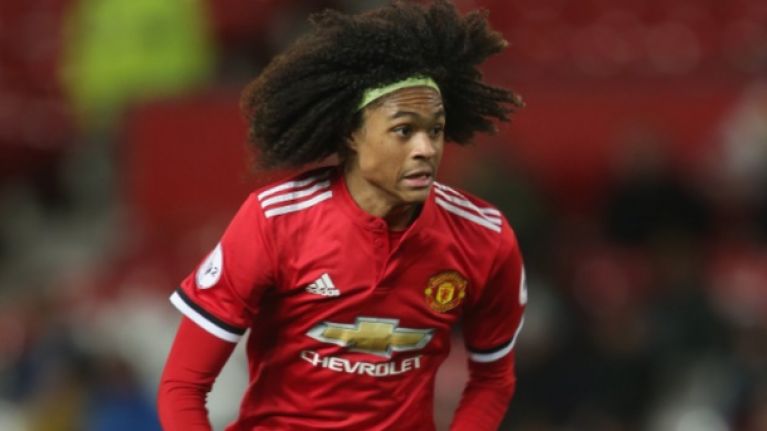 The other players who have the potential or are the ones to watch next season are a bunch of talented youngsters who are:
Luca Ercolani:
The 18-year-old Italian plays as a centre back in the under-23s and under-18s. He has got good height and is an intelligent defender. He has been an important player for the academy. He may not be ready  or the first team but has the potential to make it.
Joshua Bohui:
Bohui, the 19-year-old has caught the eyes of the managers with his performances for the under-23s this season. A creative minded midfielder who loves to start counters is definitely one to watch out for next season. He could be in line for a first-team call up.
Callum Gribbin:
One more attacking midfielder, Gribbin 19, has been playing exceptionally well for the under-23s this season. He is great on the counter and can pass the ball very well.
Mason Greenwood:
The most talked about prospect in the last few weeks, Greenwood, is on fire this season and has scored many match wining goals at under-18 level, aged only 16. He is one for the future.
Other Ones to Watch:
Aliou Taoure
Aidan Barlow
Indy Boonen
Nishan Burkart
Arnau Puigmal
Millen Baars