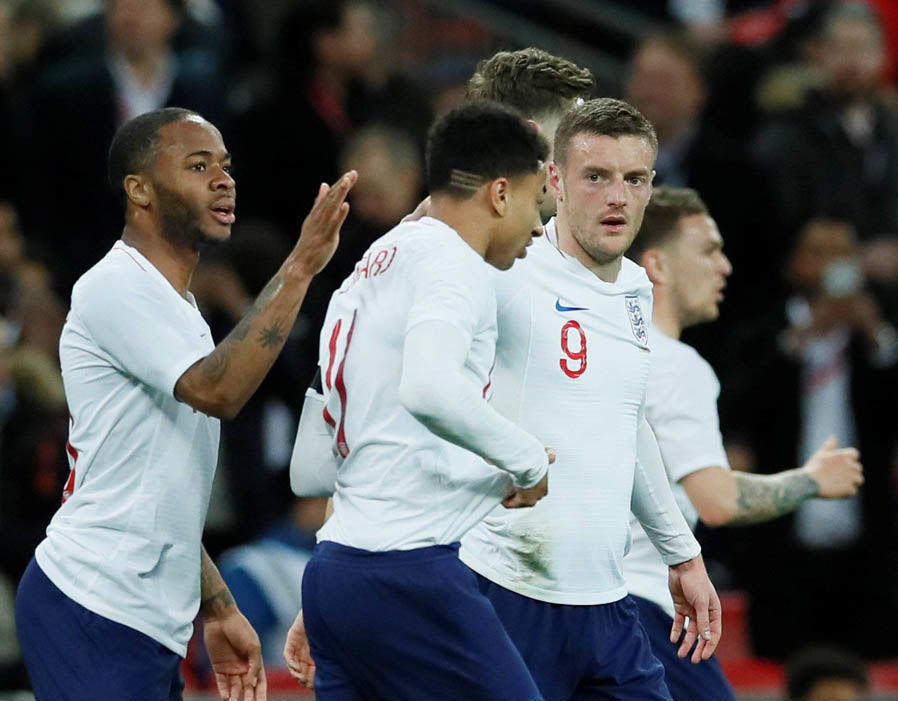 After the win over the Netherlands, we hoped to get another good result against Italy. Unfortunately, late VAR drama led to Italy being awarded a penalty which they converted well. The game finished England 1-1 Italy.

Gareth Southgate must have been very impressed with England’s performance against Netherlands as he only made a few changes from the team that started in Amsterdam. Also, he opted to stick with the same formation and it is looking more likely that we will play a 3-5-2 formation in June.

England have started the two games with three CBs and two wing backs. In the middle they had one deep lying midfielder and two midfielders with freedom to go forwards. Up top were two strikers.

Within the first two minutes, England deserved to be 2-0 down after some questionable defending and decision-making from Stones. Italy continued to push, but against the run of play, England managed to snatch the lead. In the 26th minute, a brilliant run from Sterling (during which he was fouled twice) led to Lingard taking a quick free-kick to catch the Italian defenders off guard. The ball was played to Jamie Vardy who hammered the ball into the top corner of the net.

After that first goal, England changed the game. They were looking dangerous going forwards and assured in possession. Things continued this way until the half time whistle. The problem was that England didn’t capitalise when they were on top to double their lead.

The second half was very disappointing. After such a brilliant performance towards the end of the first half, we were expecting more of the same but England allowed the Italians to keep possession. In all fairness, they were not looking very dangerous as England looked compact in defence.

However, this all changed in the 85th minute. James Tarkowski was judged to have stepped on the right foot of Chiesa. After the referee originally gave a corner kick, he opted to analyse the VAR footage and decided (rightly) that it was a penalty for Italy. Insigne made no mistake from the spot and drew Italy level.

This was a big blow for England as their performance showed tonnes of potential but the scoreline failed to reflect how well we played.

JACK BUTLAND – 6
There was not much Butland could do about the penalty as although he dived the right way, it was a brilliant penalty tucked into the bottom corner. He didn’t put a foot wrong for the rest of the game. Unlucky not to get a clean sheet.

KIERAN TRIPPIER – 6.5
He done well in creating the width down that right hand side but failed to make as much of an impact as he would have hoped. The Spurs fullback was solid defensively and did provide a threat going forwards.

KYLE WALKER – 8
I think we have found our position for Walker in RCB. He was calm and assured at the back today, making some tremendous passes (apart from a few slight hiccups) and is likely to play there throughout the World Cup. It is worth noting however that during the Euros he was our biggest attacking threat down the right hand side. It will be a big loss not having him making those great driving runs.

JOHN STONES – 4
Although he didn’t do much wrong apart from the first two minutes, those two massive mistakes could have put us 2-0 down. We cannot afford to be making such huge defensive errors on the biggest stage in the world in June.

JAMES TARKOWSKI – 6
I think he had a good debut for England and was unlucky to concede the penalty. He was composed throughout the game and showed good vision when making some forward passes.

ASHLEY YOUNG – 6.5
He has certainly given Southgate something to think about now. Young was brilliant today. He was looking like the Kyle Walker of the 2016 Euros down the opposite flank. Very strong going forwards and at the back.

ERIC DIER – 7
Did very well to break up the play and sat deep to allow the other two midfielders more freedom going forwards. Also slotted in well at CB when called upon. It looks like it might be a competition between Dier and Henderson for that starting spot in Russia.

OXLADE CHAMBERLAIN – 6.5
Constantly making those driving runs going forwards, confusing the opposition defence. Although he didn’t make as much of an impact today and looked frustrated, his rotation with Lingard was brilliant and he was working hard defensively too.

JESSE LINGARD – 7
Like Chamberlain, Lingard was brilliant today. He showed his quick thinking when taking that quick free kick which led to Vardy scoring and was a threat throughout the game. He was always finding pockets of space and creating chances. He should be one of the first names on Southgate’s team-sheet.

One thing which I would like to point out about the pairing of Lingard and Chamberlain is that it has worked very well in the last two games. I think many England fans would agree with me in saying that I hope Southgate doesn’t opt for the safer option and replace them with Henderson and Alli/Wilshere. They were alternating their forward runs well and it was a constant threat for us going forwards. Also they are both hard workers so put in a good defensive shift too.

JAMIE VARDY – 7.5
As always, his pace was devastating and threatening. He should have probably scored another but he was composed for his goal and was a constant threat going forwards.

RAHEEM STERLING – 7
He was constantly a threat going forwards, as usual. One thing which he needs to work on is his final product, whether it is passing or shooting. He has seemed to perfected this at City (unfortunately) but this continues to be his problem at national level. However, it does look like he will be pivotal in our World Cup campaign.

ADAM LALLANA – 6
When he first came on, he looked like a massive threat. His neat footwork and agility was great to watch. However he got sloppier as the game went on and failed to create much of an impact.

DANNY ROSE – 6.5
He didn’t have too much to do defensively but did showcase his dribbling ability going forwards.

MARCUS RASHFORD – 5
There is no doubt of his ability and talent but sometimes he does make things hard for himself. An example is when he was dribbling the ball forwards in a counter attack but failed to notice the options around him and ran straight into defenders.

Man of the Match: Kyle Walker