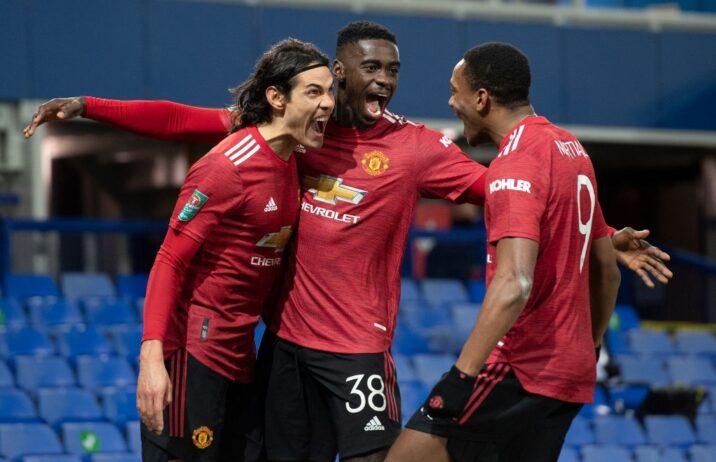 Manchester United find themselves in the semi- final of the Carabao Cup beating Everton after two late goals by Cavani and Martial. Here are the 5 things learnt from yesterdays game.

Five things we learnt from Everton vs Manchester United

Edinson Cavani, a curious free transfer signing on deadline day, has had quite an impact on this Manchester United team. With the few opportunities handed to him, the Uruguayan has taken his chances brilliantly.

He had a myriad of chances in the opening 25 minutes which drew saves from the stand-in goalkeeper, Robin Olsen, but he did not let his head go down and kept plugging away to eventually open the scoring in the 88th minute.

His movement and ability to bring others into play remain his strong points thus far.

Martial has had a frustrating season thus far, on the back of his best-ever scoring campaign where he netted a respectable 22 goals in all competitions. He has been guilty of missing great chances, which has cost his team, in several games this season.

With some urgency and direct running needed, Ole turned to his bench and brought on the dynamic duo of Rashford and Martial to influence the game. He was involved in the opener after dropping infield and laying off the ball to Cavani, who had drifted wide right to find some space, and the Uruguayan did the rest.

Martial got on the score sheet himself showing great determination by driving from midfield, initiating a counter-attack, and getting on to Rashford’s layoff to slot in for the clincher with the final kick of the game.

That’s now six goal involvements in his last 3 games (2 goals and 4 assists), he is back!

The young Dutchman who was only starting his first game since November, had a largely frustrating evening. He tried to make things happen in his out of position role on the left-wing but lacked the necessary skills, other than running in behind, to play that position effectively. United looked more threatening when Martial and Rashford came on as they rotated as inside forwards on both wings.

Ole should shoulder the blame for his frustrations as he was reluctant to play him in his best positions, either as a No 10 or as a No 8, opting not to rest Bruno Fernandes who has become heavily relied upon since joining.

The highly-rated former U23’s captain lined up in a not so unfamiliar role as a right-back last night. The Englishman put in a real shift and looked marginally comfortable in forward areas, creating 2 chances. He was strong on the tackle and did not let Richarlison get a foothold in the game indicated by 0 dribbles past him on the night.

With Wan-Bissaka playing too many games and Tuanzebe’s failure to dislodge Lindelof as Maguire’s partner, could he be a rotation option at right-back?

The usually brilliant Bruno Fernandes had a poor outing against the Toffies. He lost the ball 23 times, the highest on the pitch, and his passing was not as sharp as it should be.

Ole in the buildup to the game talked about protecting him, indicating that he was going to give him a rest but it didn’t happen. Bruno’s performance indicated that he might have needed the rest last night.

There are newfound concerns about United’s overreliance on the Portuguese talisman but he cannot play thrice a week for the whole campaign. This was the game to try out Donny van de Beek as the No10 behind Cavani or as a partner to Matic in a holding role and let him properly influence the game.