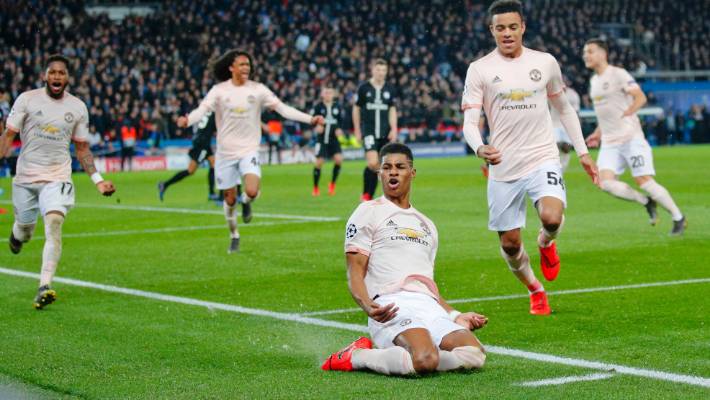 Speechless, is all I can use to describe my mood at full time. This is the first time I lost my breath due to pure joy. Oh how I love Manchester United. Ole Gunnar Solskjaer gave Manchester United arguably their greatest Champions League night since Sir Alex Ferguson left.
Manchester United beat PSG 3-1 on the night to seal progress to the Champions League quarter finals and here is my analysis of the game.
Selection
Due to our limited options caused by the suspension of Paul Pogba and injuries to 9 of our first team players, we had very limited options to go to.
Ole Gunner opted for three central defenders: Baily, Lindelof and Smalling. Young and Shaw started as our full backs. Fred and McTominay played the Defensive Midfield role. Andreas Perreira played the attacking midfield with Rashford and Lukaku being our Center Forwards.
First Half
It was a potentially career defining night for Romelu Lukaku. He bullied Thiago Silva and Buffon by tallying another brace to prolong his prolific run and provide Ole Gunner Solskjaer with a genuine dilemma when Jesse Lingard and Anthony Martial regain fitness.
Lukaku has seriously shown improvement over the past few games. His play outside the area was much more polished.
PSG created three chances, recorded 82 per cent of possession and trailed. United, inexplicably ahead, could still have scored more. The mayhem began when Thilo Kehrer under-hit a second-minute back-pass which Lukaku intercepted,with the obligatory heavy first touch, only he motored past Silva, then Buffon and slid the ball in from an acute angle.
Our defense, particularly Ashley Young, Eric Baily and Smalling were caught sleeping and this resulted in us conceding an equaliser. This was a goal that resulted from a defensive error and I hope the players rectify that.
Baily kept showing why Smalling starts ahead of him as he kept making silly mistakes. He however started the counter attack that led to Lukaku’s goal. Marcus Rashford tested Buffon who fumbled and Lukaku was just at the right place at the right time to slot in his third consecutive brace.
Dalot replaced Bailly and almost procured a third goal before the break. The rest of the first half was a bit quiet with no real threats on both sides.
Second half.
Our second half was pretty much a dull one until injury time when Rashford scored the decider.
United were out played in the second half although PSG played as though they had come just to secure their win. They didn’t give De Gea too much of hard time.
Angel di Maria dinked the ball over David de Gea in the 56th minute but the linesman raised his flag and the Video Assistant Referee was not needed. Solskjaer as usual delayed his substitutions until the 81st minute to choose Chong. Chong came on and showed glimpses of what he is capable of. He made some good runs and also participated in winning the ball back.
Mbappe could have sealed the tie in the 84th minute but was foiled by De Gea and then the superb Smalling.
Solskjaer then made his final substitution by introducing the 17-year-old Mason Greenwood for his debut. Solskjaer and Carrick were on the touchline constantly waving United forward.
Dalot won a corner. Which was never to be a corner. There was an appeal for a penalty that involved the VAR. The penalty was awarded to United which Rashford neatly scored.
Football, bloody hell. Sir Alex Ferguson’s words echo 20 years on from that evening in Barcelona where Ole Gunnar Solskjaer made Manchester United supporters believe in miracles. He did it again in Paris.