Squad numbers have a big impact in the footballing world, fans and the players themselves. Even though we should remember the player for his achievements, qualities and personality, squad numbers do play a huge role in football. To the fans the shirt is the identity of the player. The player makes the shirt memorable and significant. The best example being of Cristiano Ronaldo. He wanted the number 28 whilst at United, but, Sir Alex gave him the responsibility of the iconic number 7, a shirt worn by legends like Cantona, Best and Beckham. Wearing the number 7 gave him a sense of responsibility and added pressure of living up to the expectations of the shirt. Ronaldo took the shirts legacy to a whole new level. Even though he has reached the top on his own merit, the United number 7 gave him his identity, with which he accomplished many awards with Portugal and Real Madrid. The identity known as CR7.
Currently at United, the number 7 is occupied by Alexis Sanchez, who is finding it difficult to fit in at United, having joined from Arsenal in January. But, the topic of discussion today is the number 10 kit, which once again has fallen vacant after the departure of Zlatan Ibrahimovic, who joined MLS side LA Galaxy after terminating his United contract. Zlatan, who wore the number 9 shirt last season, acquired the number 10 after the eminent departure of Wayne Rooney. He got the number 10 as Lukaku had obtained the number 9 and he said that he basically upgraded his squad number. Zlatan didn’t have much of an impact this season, mainly due to his injury. Now, once again the number 10 falls vacant, who will be the rightful heir?
The number 10 shirt is arguably one of the most iconic shirt at United, with many legends and world-class players wearing it. In footballing sense, the number 10 role is usually of an attacking midfielder but at United, the kit has mostly been worn by strikers. Right from Lou Macari to Wayne Rooney. The kit, may not have those many famous recipients as the number 7 shirt did, but, whoever has worn it has left a legacy behind and have created history wearing it.
The most common and famous of the lot are Teddy Sheringham, Ruud van Nistelrooy and Wayne Rooney. Sheringham wore the number 10 during his brief, but iconic and rememberable spell at Old Trafford. He scored some memorable goals and played an important part in the 1999 Champions League final against Bayern Munich, resulting in the treble wining year. Scoring 31 goals in 104 appearances. Ruud van Nistelrooy, 2ndon our list was one of the deadliest strikers to have played for United and a player who was always looking to take chances with an eye for goal. In his debut 2001/02 campaign, van Nistelrooy showed what a free scoring forward he was and became a goalkeeper’s nightmare inside the penalty box. The Dutchman scored 23 goals including 10 goals in the Champions League, wining the PFA Player’s Player of the Year in that season. Over his time at United from 2001-2006, Ruud went on to score 95 goals in 150 games and also lifted a Premier League, FA Cup, League Cup and Community Shield. Finally, on our list comes Wayne Rooney. Rooney is arguably the best number 10 in football. Having signed from Everton in 2004, Rooney is United’s highest scorer scoring 253 goals during his time at United. Wayne has won all possible titles with United and wore the number 10 during his road to glory. He his one of the league’s most prolific striker and was shown us many spectacular performances on the pitch, be it his link up play with Ronaldo, his numerous free-kicks, his half-way line goal, his bicycle kick against Manchester City or his record breaking goal. All this, wearing the number 10, he left for Everton in 2017, where again he wore the number 10, the shirt, that helped him become what he is and what he is known for.

Coming back to the question on who will be the next number 10, United have few contenders in the current squad. Let’s see who deserves it and why?
First on our list comes Marcus Rashford. Rashford has been an integral part of the campaign this season. Rashford is continuing his meteoric rise to stardom and has already scored 12 goals for United this season, across all competitions. Rashford has impressed this season with club and country. His place in the England to Russia looks more or less fixed with Harry Kane’s injury basically confirming it as Rashford will be leading the front-line. He currently wears the number 19 and giving him the number 10 would be a good move by Mourinho, as it will instill a sense of responsibility in the young player, would be a nice reward and a player from the academy would carry the legacy of the number 10 shirt forward.
Second on our list comes Jesse Lingard. Lingard, has rejuvenated his form at United after being converted into an attacking midfielder by Mourinho. Basically, a number 10 role. Lingard has been one of the most important players in the squad, having scored 13 and assisted 5 this season. His pace and dynamism has been a key tool for Mourinho. His ability to create open spaces and unexpected counter-attacks from the edge of the penalty box, has led to many goals and chances. He makes a legitimate candidate for the number 10 shirt, which would an upgrade to his number 14. Number 10 would also signify his role as an attacking midfielder. He has also caught the eye of England boss, Gareth Southgate due to his performances this season, most recent, his wining and debut goal for England against Netherlands.
Lastly on our list comes Paul Pogba. Pogba isn’t having a great season at United. His career at Old Trafford has come into jeopardy with the player being unsettled after a rumored rift with the manager. Paul hasn’t been in good form lately. He plays as a box-to-box midfielder at United and his true potential isn’t really being shown, due to the managers cautious defensive tactics and Pogba’s defensive duties. Pogba hasn’t created many chances this season and is being held back and not allowed to move forward. The reason for his inclusion in this candidacy is because of his time at Juventus. Pogba is a different player at United than what he was at Juventus. He was more of an attacking midfielder, where he was set lose in the attacking third. All whilst wearing the number 10 shirt. Giving Pogba the shirt at United would be great but, doesn’t look likely. But, makes him a worthy candidate. 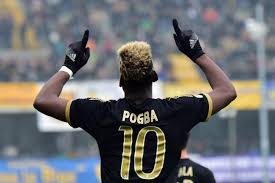 To conclude I would say that Rashford is the perfect player to be handed the iconic shirt and would definitely improve his game. Financially and commercially speaking, Rashford wearing United’s number 10 in the 2018/19 campaign would increase the shirt sales and would be the start of a new era, new legacy, new records but, in the same shirt!

1 thought on “The search for United’s next number 10 begins.”