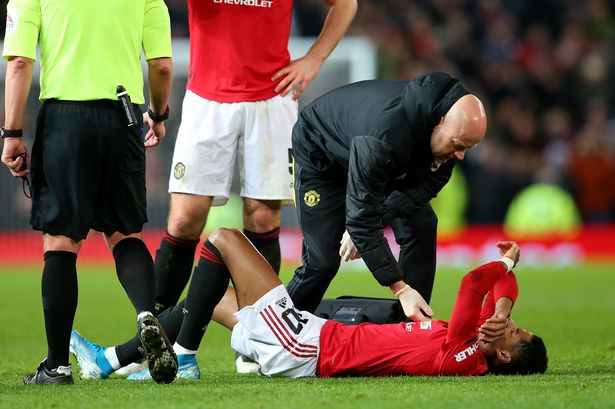 Manchester United are back on their winning ways after a stunning victory against The Toffees at the Goodison Park. Ole Gunnar Solskjaer’s managerial post was at stake after back to back defeats against Arsenal and Istanbul Basaksehir. This win would boost his confidence a lot. Everton took the early lead at the 19′. Bernard found the back of the net with a smart low finish through the legs of Wan-Bissaka. Since the Everton’s lead it has been a much splendid performance from The Red Devils. Fernandes struck twice and then Cavani enjoyed the crowning moment as United came from behind to beat Anchelotti’s team in a 3-1 triumph. It was Everton’s third defeat in a row which means they are three points ahead of Manchester United.

Solskjaer’s triple injury continues to perturb him ahead of the United fixtures.

Solskjaer does have a positive result this weekend but has a lot to think about the upcoming fixtures. He has confirmed three players picked up injuries during the Everton match. Greenwood who missed the clash at Goodison is another thing to worry for. The English striker was not included in Southgate’s latest England squad as well. This news will ease a bit for Ole and the United fans. During an interview Solskjaer stated that United had to play forcefully a lunchtime kick-off on Saturday. After playing a vital UEFA Champions League fixture in Turkey.

“Yes. Lindelof’s back, Marcus’ shoulder, Shaw’s hamstring. That’s three I can remember from the top of my head” said Ole when he was asked in an interview if there are any problems. Telles has recovered from Covid-19 and can be a potential player who can step on Shaw’s shoes down the left flank. The left back is close to returning to action after resulting a negative result. The Brazilian had a pretty decent debut against PSG in the Champions League opener.

The Norwegian was fuming too about the tight United schedule and also said that the authorities have set his team up to fail. He believes that United have been dealing with unfair fixtures and as a result players are not getting enough rest. Lindelof who was rested against Istanbul due to back injury was brought to the starting line-up at the Goodison. Though it is a two week rest for him, Axel Tuanzebe can be a perfect replacement for Solskjaer if he wants to give further rest to the Swedish International.

Manchester United may suffer a heavy blow due to Rashford’s injury.

While fatigue proved to be an issue for United. Leaving out Rashford from the starting lineup against West Bromwich can be a major blow for United. With Martial not in best of forms for United can be a bit to worry for Ole. English forward is undoubtedly in top form scoring goals with ease but United have struggled against teams sitting in deep defensive formation. This is because when team sits deep it becomes difficult to exploit the space on the pitch. They failed to create clear-cut chances against Istanbul and Arsenal too. United should learn to attack and go deep into the opponents half rather than relying on counter-attacks. Leeds United forward, Bamford was called by the England manager to the England squad in the International break.

If Rashford and Greenwood remains doubtful against West Bromwich on Saturday then Solskjaer need to think other alternatives as well. Cavani who has not started yet is likely to start as far as United’s attack is concerned.

How Solskjaer can still form his team in the absence of the injured players?

Solskjaer can still use his tactics well against West Bromwich on 21st November. They need to play in an attacking mode and cannot simply afford to drop points in match week 9.