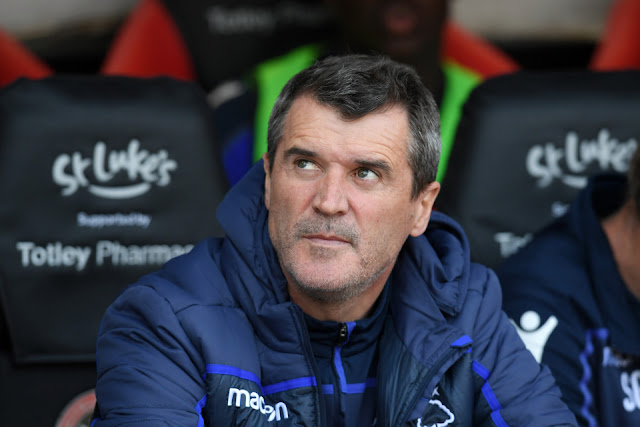 Photo Credit: Talksport.com
Nottingham Forest FC announced today (23rd June 2019) that former Red Devil, Roy Keane, had left the club after a six month stint as assistant manager, working alongside Martin O’Neil. Keane’s decision was based on his desire to pursue a full managerial role having not sat in the manager’s chair since 2011. The announcement was made at this time in order to avoid pre-season preparation disruption. He described his experience working with O’Neil as “one of my greatest in football, both as a player and coach”.
What has he done since retiring from playing?

Having accumulated 480 total appearances for Manchester United between the years of 1993 and 2005 in addition to 29 and 154 for Cobh Ramblers and Nottingham Forest respectively, Keane finished his playing career in the 2005/06 season, appearing on 13 occasions for Celtic.

Since then, the Irishman has spent some of his time working as a TV pundit for both ITV and Sky Sports, most notably during the World Cup 2018 and for Manchester United matches. His style very much involves delivering honest opinions expressed in often blunt, savage and matter-of-fact ways. No one is safe when Roy is seated at the punditry table, however, in saying that, it is incredibly refreshing to have someone on the big screen speak the straight and honest truth rather than simply fill broadcasting time with meaningless nattering or “was it a penalty”? discussions. It is fair to say however, that he did not massively enjoy this role, having said he would “rather go to the dentist” and stated that “any time I watch a game on television I have to turn the commentators off”.

His managerial career kicked off in 2006 when he took over Sunderland, who were second bottom of the Championship at the time. For a first season in management, it could not really have gone much better for Keane, winning the Championship, securing promotion to the Premier League in the process. The following season saw Keane maintain Sunderland’s Premier League status, finishing 16th. His time in the North-East ultimately came to an end when he stepped down in December 2008 with his side placed 18th in the league. Despite the success he brought the club in reaching the Premier League and holding their place, it was reported that the Sunderland players celebrated his departure as they did not enjoy playing under his distinctive “rule by fear” methods.

Keane was appointed Ipswich Town manager in April 2009, but failed to ever get his side to challenge for promotion and was sacked after a run of 7 losses in 9 matches in the 2010/11 season. He then took almost 3 years out of the game, before joining Martin O’Neil as the assistant manager of the Republic of Ireland national side in November 2013 and then adding another role to his roster in July 2014, when he additionally became the assistant manager of Aston Villa. However, he had left this role by 28th November of the same year in order to maintain concentration with his national job. During his time with Ireland, Keane got involved in numerous incidents including: an incident with a fan at a hotel, controversy over his book release and getting into a row with the Everton FC staff over the treatment/over-protection of their Irish players. Both Keane and O’Neil left their roles with The Republic of Ireland in November 2018.

O’Neil and Keane were reunited at Nottingham Forest in January 2019, when Keane once again became the assistant manager. However, it has now been announced that he has left this role to focus on his own solo managerial career after a 9th place Championship finish.

What is next for Roy Keane?
I think it is immediately fair to say that Keane will not be actively pursuing employment as a pundit and whatever his next role is, we can narrow it down to ‘manager’ status rather than ‘assistant manager’ or any other kind of role which he may be linked to, such as ‘director of football’.

With the fact in mind that he has not been employed as a manager since 2011, it is unlikely that Keane will be expecting to go into Premier League employment and it seems more likely that if he was to return to the Premier League, it would be via promoting a team. Besides, the only club currently obviously open to a new manager is Chelsea and their eyes seem firmly set on club legend, Frank Lampard. However, if this move was finalised, this would leave the Derby County job up for grabs and one which Keane could potentially see as another chance to achieve immediate promotion as he did with Sunderland. However, having played and worked for east-midlands rivals, Nottingham Forest, this one may not sit well with the Derby fan base.

Since his departure was announced, links have been made with the manager roles at several clubs, including: Sunderland (again), Doncaster Rovers and Birmingham City. At this point in time it remains very difficult to predict his next move, but I am sure whatever he chooses, his intention will be to replicate his early success with Sunderland having learnt from his more recent roles and hopefully build a successful career as an out and out manager. Whichever club ultimately decides to employ him will have to be fully aware of the methods to expect as Keane will undoubtedly bring his ruthlessness and blunt honesty into any role, which could potentially lead to friction with the players and/or the board of the club.

Many people will point their fingers towards a role at Manchester United, but for now, Keane has made it clear that he wants to become a manager again, so I highly doubt we will be seeing him involved at Old Trafford in the short-term future at least. However, if he has any free time and wants to drop by the United dressing room, he is always more than welcome to unleash a verbal volcanic eruption at the majority of our current squad.