After a ton of individual errors this season from the chuckle Brothers – Smalling and Jones, we have noticed a wide chasm in our defence. Often over committing to a challenge early or dispossessing too close to the goal, we are heavily reliant on David De Gea to save their blushes.
Even our other center back, Victor Lindelof, is not as sure footed as you’d like a title contender’s centre half to be. However, Lindelof has plenty of potential in him to turn his fortunes around. What we lack in the heart of defence is a commanding force who can stand strong and lead the men at the back. That commanding force will come from experience and talent. The best example of talent and experience in the Premier League are the centre back pairing of Vertonghen and Alderweireld.
Over the course of last season, Toby Alderweireld has lost his place in the Spurs starting lineup majorly due to injuries and brewing discontent at the North London club. He is looking for a move away and Woodward and his men should be doing everything to sign him up. This post is a detailed explanation on why we should sign Toby Alderweireld and what he would do for Manchester United. 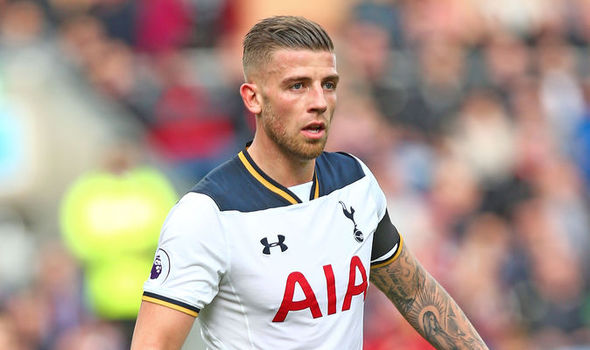 Let’s start with what we currently have,
Eric Bailly is a solid centre back and is not far from the finished product. If all goes well, he can be a mainstay at the club for years to come. Bailly is technically gifted and never backs out of a challenge. The only worrying thing is his injury rate. He has been getting injured more often than we’d like. And once he does get injured, we have Jones, Smalling, or Rojo taking his place.
Victor Lindelof is an amazing prospect. He had a real torrid start to the season but he has been finding his feet. The Swede is great at playing the ball forward and being a distributor at times. Mourinho loves playing out from the back (when we’re not chasing a game) and Lindelof can be an asset there.
Then we have Jones and Smalling who are an accident waiting to happen. They have a great run of games for 2-3 weeks and then end up scoring a own goal or giving away a needless tackle really close to the goal. These two can not be first choice centre backs for the club. Then there’s Rojo. I feel he’s not smooth enough to be a centre half and left back suits him more.
Now what does Alderweireld bring in,
I feel the best pairing for Toby will be with Lindelof. Those two together will compliment each other in ways that accentuates the others’ strengths. While Lindelof finds his feet, he needs someone at the back who can cover for his mistakes. He will get the sense of confidence going forward that there is a solid defender behind him.
Toby also adds that leadership to our defence. His leadership will give Lindelof a better sense of positioning and judgement. We can use his talent and leadership for 3-4 years while our own defenders develop. Similar to when Chelsea re-signed David Luiz. He brought in the composure and leadership at the back and despite being one of the last buys of the transfer window, we was an important part of the jigsaw when Chelsea won the league under Mourinho.
Alderweireld adds the same components to our game. Components that we really need in defence because we can not have another season with De Gea pulling out blinders every other game. The balance is important in any defence and that is what we get if we sign the Spurs veteran.
Time for some numbers,
Toby Alderweireld has some amazing statistics in the two big seasons that Spurs had – 2015/16 and 2016/17. In 2015/16, he played all 38 games losing only 6 and conceding only 35 goals. That is an average of less than a goal per game. Overall he kept 13 clean sheets. He also played 238 accurate long balls and has a crazy amount of interceptions and recoveries.
In the following season, he pulled off equally respectable stats but having played a lesser number of games. He conceded only 17 goals in 30 games and kept 14 clean sheets in the process. He also lost only 3 Premier League games the entire season. Raking up similar numbers in interceptions and recoveries.
And that is why we should absolutely sign Toby Alderweireld. However, the man we are dealing with is Daniel Levy. It is always tough doing business with him. At first, he wanted £75m and later on he wanted Martial to be included in the deal. I feel that a price of about £50m is a decent price in this market, considering the fact that he will cost us only £25m this time next season. Anyway, the financial negotiations are down to the businessmen and the board. I just hope we can sing him without losing out on Martial. So that’s all for now, until next time… GGMU!