A true sucker punch to Manchester United fans from all around the globe as a very poor and lacklustre performance was capitalised upon by bottom side West Brom as Jay Rodruigez scored his 7th goal of the season and gave Manchester City the title. It was sickening to watch and the sheer number of misplaced passes and uncoordinated attacking moves just frustrated the Old Trafford faithful and you could see many people leaving after 80 minutes and more and more poured out of the stadium as the clock ticked on. It almost seemed like United were playing to go behind so that they could pour forward but when they did, United attacked centrally and were easily stopped by the hardy West Brom centre-backs and rarely used their width.
PLAYER RATINGS:
DAVID DE GEA 6.5/10
While there was nothing he could do about the poor defending that led to the goal, he made a crucial save in the first half to deny Jake Livermore but other than that had a quiet game. It’s matches like these that probably put doubts in de Gea’s mind over staying at United and rightly so.
ANTONIO VALENCIA 5/10
Rarely got forward effectively and when he did, his crosses never really fit the positions the attackers had in the box. There was one real occasion to tee up Sanchez in the box, but instead the Ecuadorian drilled it towards Lukaku and it was cleared with ease. 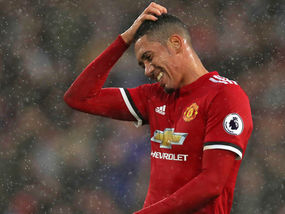 CHRIS SMALLING 5/10
Did not have much to do but was relatively average when trying to get attacks started as he rarely looked for a long or forward pass and even when he was further up the field, had no real impetus.
VICTOR LINDELOF 6/10
He was a bit nervy in the first half but he was better of the two centre backs as he tried to get attacks going with his forward thinking play.
ASHLEY YOUNG 5/10
Rarely got involved and when he did his crosses were relatively average. While he is one of the most versatile players in United’s arsenal, most United fans are now starting to want Luke Shaw to come out from the cold and fulfil his potential.
NEMANJA MATIC 4/10
It was his mistake that lead to the goal and he was not his usual composed and calculated self in the midfield. He often gave the ball away and mistimed his passes, giving the Baggies the opportunities to harass United’s defence. However, he could be United’s captain in a year or so with his consistency and prescence in the squad and would be a better choice than Valencia or Smalling.
ANDER HERRERA 3/10
He was unlucky not to be awarded with a penalty in the first half but other than that he had a shocking half that could have been his worst in a United shirt. His passes were misplaced and when he tried to attack it was oddly too high for a CDM.
PAUL POGBA 4/10
He said that he can attack more when in a midfield three but although he showed his skill and passing accuracy, he did not impact the game as he would have liked to, and it was risk for him to continue playing having been booked in the first half and so was rightfully substituted for Martial. He needs to step up and soon.

JUAN MATA 3/10
Did not offer much width and when he got on the ball he delayed the play too much and his crosses were poor and too infrequent. He normally holds the glue in the team and makes the plays work, but this was just poor.
ALEXIS SANCHEZ 5/10
He worked hard admittedly but he seriously needs to stop trying to recieve the ball so deep and then work the ball from 30/40 yards out and instead become a nightmare for Allan Nyom. It was confusing in the last thirty minutes to see Sanchez’s position and he sort of ghosted out of the game. Not the performance he would have hoped for.
ROMELU LUKAKU 6.5/10
In all fairness to him he tried so very hard to score but Ben Foster was undeniably spectacular on Sunday and made two fantastic saves to prevent Lukaku, in both halves. The Belgian held play up well and even produced a class cross which Mata and Pogba watched go past as they were not far forward enough to reach it.
SUBS
JESSE LINGARD 4/10
He was rather average when he came on and did not affect the game. He had a chance to set up either Lukaku or Martial in a 3 v 2 and completely messed up the pass. It was a poor performance from one of the stars of United’s season and he will not be happy with his contribution to the match, or indeed lack of it.
ANTHONY MARTIAL 2/10

Had genuinely no effect on the game and when he tried anything it didn’t really come off. There were times that, like Sanchez, he was picking the ball up from forty odd yards out and simply passed it sideways. Does that look like a player ready to fight for a place in the Manchester United’s squad? He needs to sort himself out soon or he may end up somewhere else, to the dismay of most United fans.
MARCUS RASHFORD 4/10
Saw him at least run at the back four but it was so congested that it rarely came to anything. He should get more chances as the season closes and youngsters at this stage need their chances.
OUR MAN OF THE MATCH: UNDESERVED