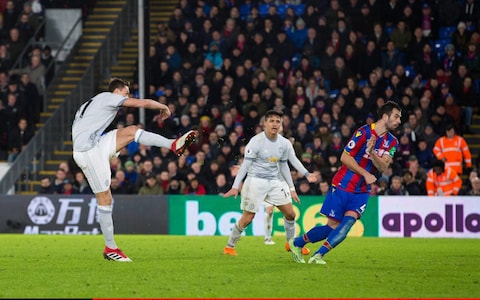 CRYSTANBUL
From 2-0 down, Manchester United turned it around and won the game 3-2 thanks to an outstanding screamer from Nemanja Matic in Fergie Time.
We started the game pathetically. In the 5th minute we allowed Tomkins space in the box and he almost scored a bicycle kick. As Manchester United continued to be sloppy in possession, Andros Townsend broke the deadlock 11 minutes into the game. His curler from outside the box took a massive deflection off Lindelof and ended up in the back of the net. This is when I expected us to wake up and take control of the game. Unfortunately, that was not the case. Palace continued to dominate the first half and we were very lucky to go into half time only 1-0 down.
According to Mourinho, 50% of his half time talk was *beep beep beep*. The team knew that they had to come out in the second half and snatch an equaliser. At the break, Rashford replaced McTominay.
Three minutes into the second half, as our players fell asleep, a quick free kick from Palace allowed them to double their lead. Van Aanholt capitalised on Lindelof and Smalling napping at the back. It certainly looked impossible for Manchester United to come back from this now, especially with the way they were playing.
With us dominating the ball, we were finding it hard to break down the resilient Palace defence. After a corner was headed out in the 55th minute, Valencia’s cross found Chris Smalling in the box to head United back into the game.
United made a double substitution as Shaw and Mata replaced Young and Valencia.
With 15 minutes left to go, our Belgian hero scored the goal to draw us level. After Alexis Sanchez’s effort struck the bar, the ball fell to Lukaku, who kept his cool and fired past Hennessey. Now it was time to look for the winner…
One minute after equalising, we almost went behind AGAIN. But this time, the greatest goalkeeper in the world stepped up to make a world class save and keep our hopes alive. De Gea made an outstanding save to deny Benteke’s header from putting them back in front.
As the game was drawing to an end and it was looking like we might have to do with a draw, Nemanja Matic had other ideas! Our Serbian scored a sensational goal to win us the game in stoppage time. He struck the ball deliciously from outside the box to net his first Manchester United goal in style! The £40 million signing is our only outfield player to start all 29 Premier League games this season but nobody would have expected him to come up with this!
Overall, it was a very poor and sloppy performance but grit and determination brought us back in it and a moment of pure class won it at the end. However, we can’t take anything away from the players as they showed desire to not only get back into the game, but to win it!
Manchester United came back from 2-0 down to win the game for the first time in over 4 years, and what a way to do it!
Next, United face Liverpool at Old Trafford and will hope for another three points! COME ON UNITED!
I LOVE THIS GAME #GGMU