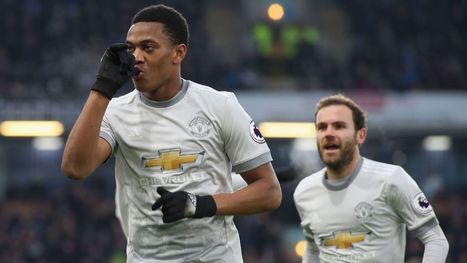 United grabbed all three points at Burnley thanks to a beautiful strike by Anthony Martial.  Here is how Moutinho’s men performed at the Turf Moor.

The United keeper wasn’t called upon to do much today but did make two rather routine saves.  He was saved by the crossbar once, but seemed to have the area below the bar covered.  His distribution wasn’t up to his usual brilliant level with his pass success rate around 25%.  Tough to grade him below a 7 though as he did keep the clean sheet, and hasn’t conceded since December.

Out of position a lot vs. Burnley.  Tried to be an outlet in the attack, but did not affect the game in attack.

Pretty solid in the match.  Some awkward challenges, but ultimately, marked his man well all match.

Better and better each match and was United’s best defender today.  Man-marked well, and read the game.

Got his spot back after return from injury. Looked a bit rusty.  Was into the attack, but didn’t do much to affect the game.

A 7 were it Herrera or Fellaini, but by Pogba’s standards, it was below expectations.  Had moments where he controlled the match, but was frequently frustrated and was nearly sent off.  Burnley doubled him consistently, and he tried to do too much with the ball at his feet.  Nearly scored on a spectacular volley in the first half, but hit it over the bar.

Cool as you like from the holding midfielder.  Cleaned up the mess, and cleaned it up calmly.  In American football, there is an old adage that if you don’t call an offensive lineman’s name all day it is a good thing, and it is similar for a holding mid.  Good solid performance.

You have to believe his minutes are threatened by the imminent arrival of Alexis, he did not do much today to dissuade that position.  He was mostly invisible in attack.

The rising starlet was stymied by the physicality of Burnley, ultimately subbed off.

Another player whose minutes may be threatened by Alexis, Martial was largely a nonfactor in the contest, but came up with a brilliant goal that ultimately stood up for all three points.

A monster.  Lukaku was all over the wings and the attacking box, brilliant in hold up play, and his cross to set up Martial’s goal would have been worthy of an attacking midfielder’s.  As great as a striker can play without a goal.

Came on to help United in defense to replace Mata.  Was solid but not asked to do much.

The confidence just isn’t there for the youngster.

Came on to waste time in stoppage time and did just that.

Man of the Match: Romelu Lukaku