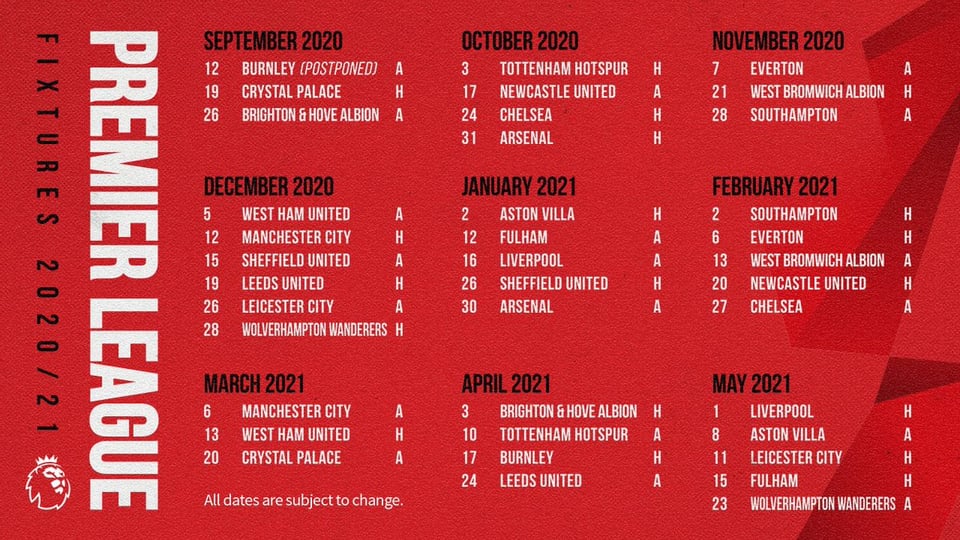 The Premier League fixtures for this season has been released and there are definitely some talking points in there. A fixture list can be very important in how the Premier League season turns out as Manchester United will be playing Champions League football as well typically, a weaker side or a home game is favoured at the end of a crowded week. Similarly, a run of easy fixtures towards the tail-end or mid-way through the season can be excellent in picking up some points and gathering momentum. So let’s take a look at how the season ahead is going to be for Manchester United.

Our first game of the season away to Burnley has been postponed as we’ve been given an additional week’s rest due to the Europa League fixtures running longer than usual. That means our first game will be against Crystal Palace at Old Trafford on the 19th of September (7 more days to finish off transfers before the season begins, but I’m not holding my breath at this point!). Our next tricky fixture is against Tottenham Hotspur on the 3rd of October with Arsenal and Chelsea back to back to wrap the month up. Fortunately, all three of these fixtures are at home. Personally, I prefer facing the Top 6 teams away from home in the first half of the season and then playing home games in the second half so this can get tricky towards the second half of the season. November should be fairly relaxed with just 3 games in 31 days. December is by far the toughest month with 5 games in 16 days which is almost a game every three days. To make matters worse, in this time, we face Manchester City, Leicester City, Leeds United and Wolverhampton Wanderers.

January has 5 games, 1 less than December, but we travel to Anfield and The Emirates in a matter of 14 days. Our next big fixture would be Chelsea away to wrap February up but should we make it to the knockout stages of the Champions League, February can turn out to be extremely hectic. March sees us travel to the Etihad and an away trip to Spurs and Elland Road awaits us in April. Last season we had our best run towards the last few months of the season but now we face Liverpool, Leicester and Wolves in the last month of the season.

We will need a lot of squad depth to get through months like December and January. Having important games in those two months, the results can shape the mentality of the second half of our season. Bruno Fernandes, Paul Pogba, Marcus Rashford and even our defenders will have a very tiring schedule and risk serious injury due to fatigue. Also, our two busiest months (December and January), sees us play 7 away fixtures. That said, getting all three points in all the games in September, November and February is an absolute must. If we do strengthen our squad this summer, we stand a good chance of doing well but carrying the same squad onto next season could be a huge mistake on our part.