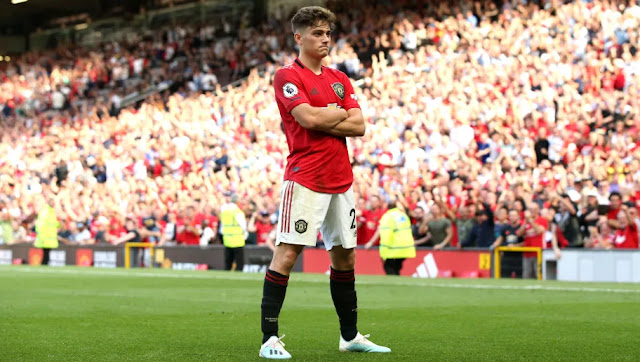 The path to the top for modern footballers is well mapped out, with elite clubs hoovering up the best talent to fill their academies leaving the smaller clubs to make do with what’s left. Over a number of years each player is assessed and scrutinised continuously, with some inevitably falling to the wayside allowing the more gifted kids space in which to flourish. All of this happens in the full view of the fans, with games shown live on club TV, so that by the time a player is ready to make the step up to the first team everybody already knows what to expect. The system has become so effective that more players than ever before reach the top while they’re still teenagers, with many becoming millionaires by the time they’re 21 years of age.

Daniel James’ journey to the top has been different, which explains why relatively few United fans were even aware of his existence until rumours began circulating in May of his impending transfer. He came through the academy at his hometown club, Hull City, before signing for Swansea as a 17 year old for a fee of £72,000. Swansea City were a Premier League club at that time and their academy was part of the Elite Player Performance Plan (EPPP), which meant that Hull were effectively powerless to stop him moving. At Swansea it wasn’t long before James was in the matchday squad, scoring on his debut in an 8-1 demolition of Notts County in the FA Cup. Building on that he became a regular in the first team and caught the eye of Marcelo Biesla, who saw the Yorkshireman as the missing piece in his Leeds United promotion puzzle. A fee of £10 million was agreed between the two clubs and James travelled to Elland Road for his medical on the January 2019 deadline day, before Swansea inexplicably pulled the plug at the last minute.

During Swansea’s FA Cup quarter final against Manchester City in March of this year James ran Kyle Walker ragged, which is perhaps where he appeared on Solskjær’s radar, either that or Ryan Giggs alerted the United boss after seeing him at first hand on Wales duty. Either way, the gaffer felt that despite his lack of top level experience there was enough about James to warrant a £15 million punt. Some questioned whether it was even possible these days to make the transition from a promising Championship starlet into a fully fledged Premier League star. Eight minutes into his debut they questioned no more.

So far this season James has featured in 16 games, scoring three goals and providing three assists, while at international level he has scored two and assisted one since his debut exactly one year ago. His stats are good and although not prolific, what sets him apart is his pace, particularly with the ball at his feet. Defenders are terrified of players like James, because if he gets past them they know they’ll never catch him. An area he needs to work on is his strength, as he can be outmuscled, however, this is easily fixed – in fact you can already see that the strength and conditioning work facilitated by former player Mike Clegg is beginning to have an effect on his physique.

In recent months we’ve experienced what you may politely call mixed fortunes, which have been put into sharp focus by the successes of our traditional rivals. Some have questioned the managers credentials, whilst others have cast aspersions at certain senior players and their apparently laissez-faire attitudes. One thing that unites us all is the feeling that you can only get when a winger picks up the ball on the halfway line and has just one thought in his mind: attack. The crowd roars, volume rising with each yard gained as everyone rises from their seat. A beaten full-back still tackling empty air can only watch as the trigger is pulled, then the brief moment of silent anticipation, the sharp intake of breath, before the ball hits the net, followed by the explosion, that tumultuous release of emotion.

This is what Dan James gives us, and it is exactly what Best, Whiteside, Giggs and so many others have given us. It’s pure joy and it’s the reason we love football.