The Premier League has witnessed many great rivalries over the years. Rivalries which defined seasons, rivalries that were just classic games over the years, which were fun to watch. Some of them being, Manchester United vs Liverpool, The Merseyside Derby (Liverpool vs Everton), The Manchester Derby (United vs City), Arsenal vs Chelsea, Arsenal vs Spurs and many more. These rivalries, one of the greatest in England, caught the eyes of the world audience. These matches never disappointed, always edge of the seat thrillers which showed the might of the teams and showed who ruled the land.
Over the years, Manchester United and Arsenal have provided us with some memorable encounters which never disappointed. It was like the clash of two tactical giants, Wenger vs Ferguson. Both these teams have had great matches with great drama, passion and footballing excellence. Sir Alex and Manchester United having the upper hand. With United’s final match coming up against a member of the big 6, Arsenal, let’s have a glimpse of the top 6 classic encounters between the two sides. Their last meeting resulted in a 1-3 United win at the Emirates.
Manchester United vs Arsenal, 2001, Score 6-1
In the 2000/01 season, United faced Arsenal on the 25th of February. The win got them closer to the title. Dwight Yorke scored an impressive hattrick in the first 20 minutes of the match, followed by goals from Roy Keane, Ole Gunnar Solskjaer after Thierry Henry equalised Yorke’s first goal. Teddy Sheringham scored the final goal on stoppage time which made the final score-line was 6-1. The win more or less confirmed the title for the Red Devils.
Arsenal vs Manchester United, 1999, Score 1-2
In the treble winning season of 1998/1999, United reached the FA Cup Final after defeating Arsenal in the Semi-Final. The tie reached a replay due to a 0-0 draw. In the replay, on 14th April, David Beckham scored the opener followed by a quick equaliser from Denis Bergkamp. The game stretched 1-1 after stoppage time after a fantastic penalty was saved by Peter Schmeichel. In extra-time, Ryan Giggs scored one the most memorable goals in United history by dribbling past the entire Arsenal defence from his own half and slotted the ball high into the net. He topped it off with a passionate celebration.

Manchester United vs Arsenal, 2004, Score 2-0
A classic game with a great significance. On October 24th, United stopped Wenger’s ‘Invincibles’ when Sir Alex halted the Gunner’s 49 game unbeaten record. One of the most controversial encounters, Ruud van Nistelrooy opened the scoring followed by an allegedly proclaimed wrongful penalty was given to Wayne Rooney, which sealed the match. This match kicked off the famous and notorious Roy Keane vs Patrick Vieira rivalry after they both exchanged words towards each other. The fight intensified and ended when a pizza landed on Sir Alex’s face. The match was named ‘The Battle of the Buffet’.

Arsenal vs Manchester United, 2005, Score 2-4
The match that unleashed the dark side of the football bad-man, Roy Keane. Following the incident in 2004, United and Arsenal faced off once again, this time at Highbury. The match kicked off in the tunnel when Keane and Vieira went at each other once again, this time, Keane accusing the Frenchman for getting into Gary Neville’s head and bullying him. The fight continued in the match, that resulted in many crunching tackles and Keane and Vieira physically confronting each other. The match ended 2-4 win for United.

Manchester United vs Arsenal, 2011, Score 8-2
One of United’s most explosive matches and one of the best and most remembered fixture for the two sides. United were in rampant form right from the start. Rooney scored a fine hattrick, followed by a brace from Ashley Young during his winger days, and goals by Danny Welbeck, Nani and Ji-Sung Park. Arsenal couldn’t get anything out of the game as their squad were suffering from an injury crisis, but, managed to score two goals from Theo Walcott and Robin van Persie and a penalty saved by David De Gea. 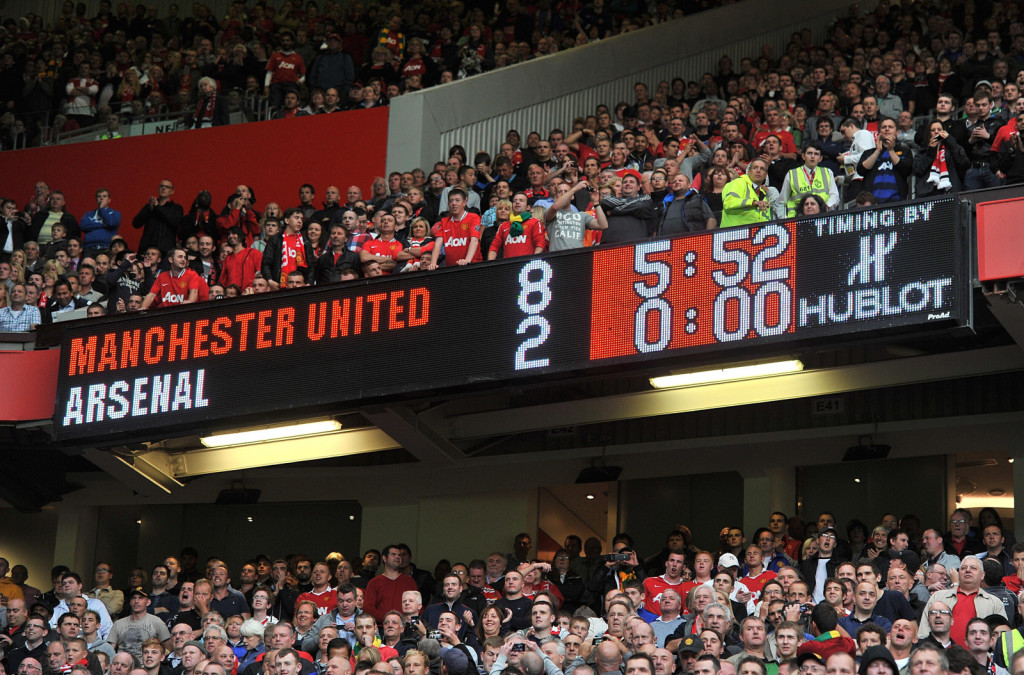 Manchester United vs Arsenal, 2016, Score 3-2
Coming to the recent ties. United defeated Arsenal 3-2. An 18-year-old Marcus Rashford made his Premier League debut in a 3-2 win against Arsenal on 28th February 2016. After impressing on his debut in the Europa League, Van Gaal named Rashford in the starting eleven against Arsenal. Rashford scored a brace in his Premier League debut followed by a goal from Danny Welbeck in the first half. Ander Herrera scored the 3rdgoal followed by a goal from Mesut Ozil. The game ended 3-2.