After a hard fought win against Brighton, many fans were sweating at Watford’s recent form and a trip to Vicarage Road was not the preparation needed for the big game at the Emirates. A nervy first few minutes was cut out by a sublime volley from Ashley Young beating Heurelho Gomes at his near post to give Manchester United a much needed lead, but there was plenty more to come from the England international. After Pogba was brought down by Doucoure, Ashley Young confidently took the ball away from Pogba and Lindelof and curling a superb effort past the Brazilian between the sticks and celebrating in fashion. Martial and Lingard’s movement in the first half was outstanding and Martial was rewarded for his hard work with a sublime finish to make it 3-0 and made Marco Silva’s half-time team talk much more stressful.

A slower start to the second half but clearly Watford were on top from the restart. The unfortunate events of the second half began with Nemanja Matic coming off limping for Ander Herrera and may be in doubt for the Arsenal fixture. The nightmare continued when Romelu Lukaku squandered an open goal opportunity by taking far too long on the ball and really needs to regain some confidence ahead of the Saturday match. Marcos Rojo’s solid first half was shadowed by his nightmare of a second half when he brought down Pereyra and conceded a penalty with 13 minutes to go and the captain slotted the penalty past De Gea. Watford exploited the left side of Manchester United with Femenia powering forward at every opportunity and brought about Doucoure’s finish with 83 minutes on the clock and the pressure was turned on the Red Devils for a stand-off finish at Vicarage Road. However a piece of magic from Jesse Lingard finished the game with a superb solo run and a classy finish past the Watford keeper to send Manchester United five points behind their bitter rivals and blazing with confidence for their trip to North London at the weekend. 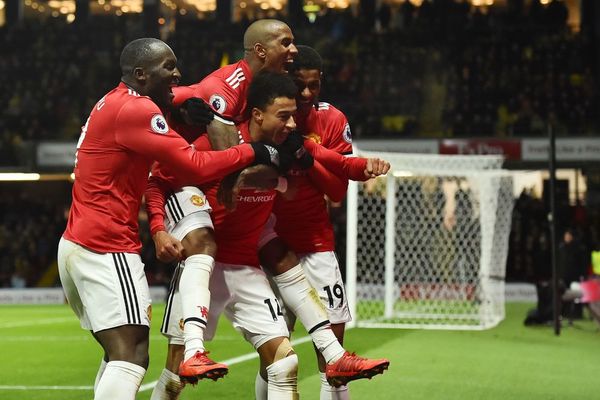 DAVID DE GEA 6/10
Easily the most bored player on the pitch had a few catches to make and was sent the wrong way by Troy Deeney but had very little to do and could do absolutely nothing about Doucoure’s strike
ANTONIO VALENCIA 6/10
Didn’t do much of note but was defensively and offensively solid throughout
VICTOR LINDELOF 8/10
He just keeps improving, a fantastic defensive performance and his passing was outstanding as well, he will be itching to show his mettle at the Emirates on Saturday.
CHRIS SMALLING 8/10
His best performance this season, always strong in the air and his tackling was superb
MARCOS ROJO 5/10
A solid first half but looked like a shadow of the player he was last season in the second half, conceded the penalty and looked shaken after that point
ASHLEY YOUNG 9/10
Sublime, fantastic technique to score the volley and the free kick just topped it, curled it beautifully and no chance for Gomes. Brilliant.
PAUL POGBA 7/10
Controlled the tempo of the game and always showing his physical presence with his surging runs forward and really should have nodded home from Lingard’s cross.
NEMANJA MATIC 6/10
Usual self, a solid performance with consistent distribution and defending, worrying to see him go off after 54 minutes, hopefully it was just a precaution
JESSE LINGARD 8/10
His movement was outstanding in the first half and delivered a glorious cross which Pogba should’ve put away and the goal was outrageous, a fantastic game for the winger
ANTHONY MARTIAL 8/10
Another great performance from that man from France. His movement and skill was wonderful to watch and he took his goal very well to make it seven for the season

MAN OF THE MATCH: ASHLEY YOUNG