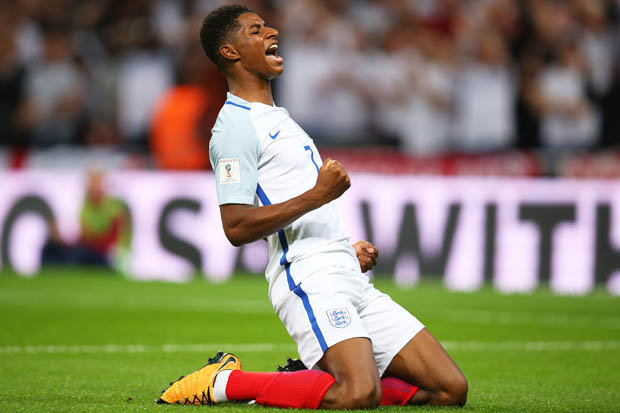 It’s that time again that some football fans love yet many hate – it’s when the domestic and European programme is temporarily halted and the latest round of World Cup European Qualifiers takes place. Naturally, several United stars will be hopefully helping their countries enhance their chances of qualifying for next year’s tournament in Russia.

In the UK, most eyes will be on England’s matches, as Gareth Southgate’s boys look to cement the progress made so far. Unbeaten England top Group F, five points clear of second place Slovakia, and can complete their qualification by defeating Slovenia on Thursday, rendering the tie with Lithuania on Sunday meaningless. Chris Smalling, Phil Jones, Jesse Lingard and Marcus Rashford will all hopefully make the team and ensure England’s place in the 2018 tournament.

Scotland can actually help England qualify by defeating Slovakia the same night England take on Slovenia, and England will help Scotland if they win as the Scots can still clinch a playoff place. Domestically, Northern Ireland have a difficult home tie against Germany followed by a trip to Norway, Wales are in Georgia and then host Ireland, while Ireland’s other game is at home to Moldova.

The key United pair of Romelu Lukaku and Marouane Fellaini will probably be taking it easy for Belgium’s games at home to Bosnia & Herzegovina and Cyprus. Roberto Martinez’s men sit atop Group H having amassed twenty-two points from eight games, and are so far the only European nation (aside from hosts Russia) to have qualified for the finals.

A Paul Pogba-less France will be hoping to gain ground on their rivals after completing their ties away to Bulgaria and at home to Belarus. Group A is one of the most keenly-fought European groups, with France, Sweden, the Netherlands and Bulgaria all still having a chance of qualification. Daley Blind will no doubt be playing for the Netherlands in their games against Belarus (A) (no call up for Timothy Fosu-Mensah this time around) and Sweden (H), and of course in the latter game Blind will be joined on the pitch by Old Trafford new boy Victor Lindelof, who’ll be wearing the yellow and blue of his nation’s team.

Armenia captain Henrikh Mkhitaryan will be praying for miracles if he wants to perform in Russia next year. Armenia are out of the competition already, picking up just six points from their eight games with wins against Montenegro and Kazakhstan, and face Poland and group whipping-boys Kazakhstan in the return fixture.

Serbia have emerged as the unlikely likely winners of Group D, which they top by four points. Nemanja Matic should help his team secure top spot in games against Austria and Georgia.

Finally, the most intriguing battle for qualification should be found in Group G, where Spain are three points ahead of Italy. David De Gea should be in goal for Spain as they host Albania then visit Israel, while full-back Matteo Darmian will line up for Italy for their games against Macedonia and Albania.