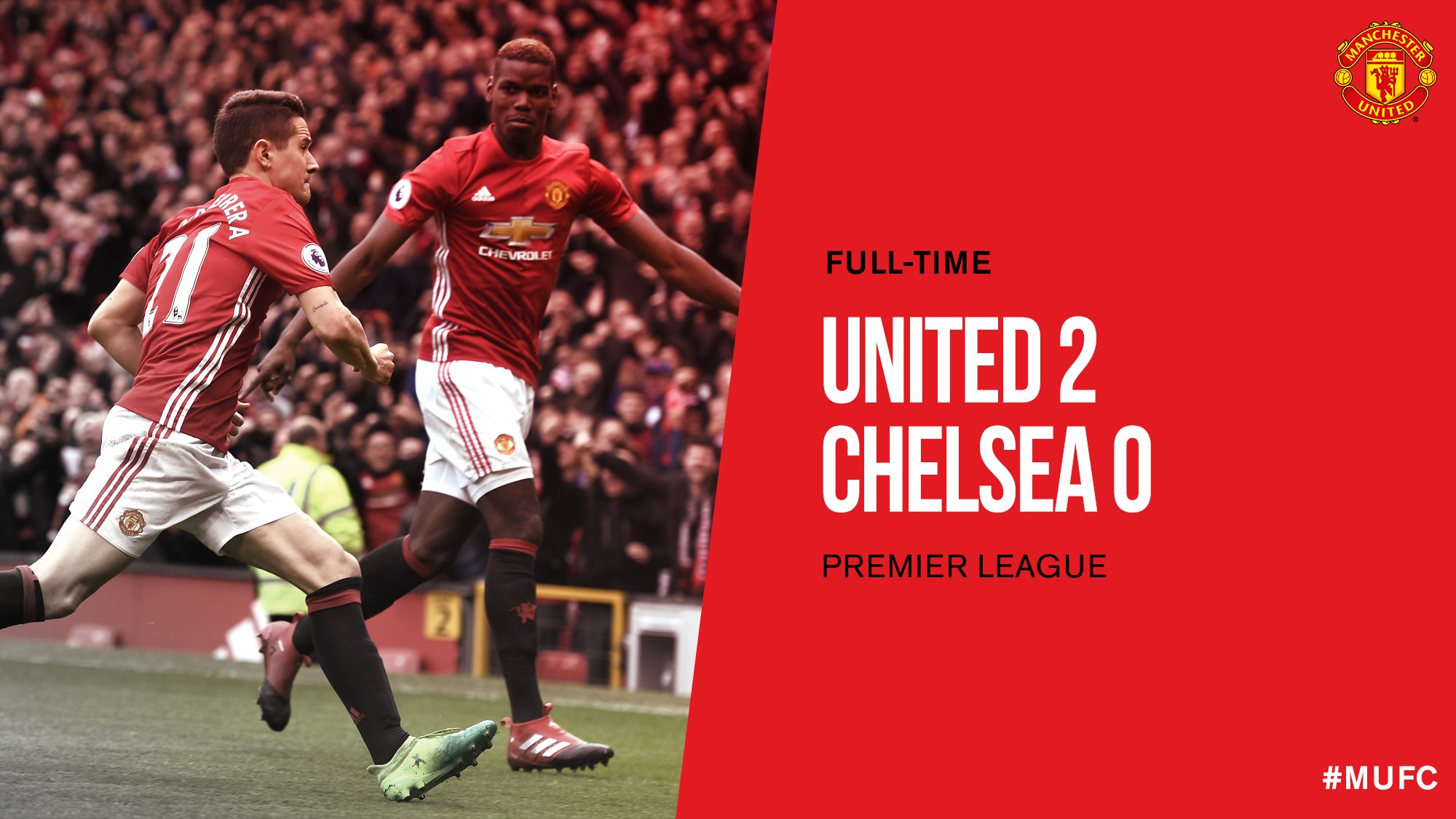 I still feel like I’m in a dream. We actually did it! We beat Chelsea! After seeing our line up and realising that Jose had fielded a “weaker team” after Jose decided to rest Ibrahimovic, most fans lost hope and a loss to the league leaders looked inevitable. Even I thought we were destined to lose. But Jose Mourinho, the tactical mastermind, managed to pull it out the bag and the lads went out there and were exceptional.
Our first goal was somewhat controversial as Ander Herrera blocked Nemanja Matic’s pass in midfield with his hand, but the referee saw no infringement by the Spaniard. Ander Herrera then picked out an exquisite pass behind David Luiz to Marcus Rashford, who kept his composure and lifted the ball over Begovic into the bottom corner of the goal.
Ashley Young was the player to thank for the second goal as his hard work down the wing led to him dispossessing N’Golo Kante in the box. The ball fell kindly to Ander Herrera, who’s effort took a big deflection off Zouma to end up in the back of the net.
Today’s man of the match was Ander Herrera. His performance was world class and today he looked like the Premier League’s best midfielder. Ander Herrera was all over the pitch today. He was man marking Eden Hazard, who seemed non existent thanks to excellent marking by Herrera. At some points he was playing in right back in order to track Hazard’s runs, but somehow he was still everywhere else on the pitch, a trait which we usually associate with N’Golo Kante. Even with the job of marking arguably the Premier League’s best player, Herrera still found a way to thread a beautiful ball through to Rashford for the first goal and get the second goal himself! This has to be the best performance I have ever seen from the Spaniard.
Recently we have been complaining that the team hasn’t got the ability to kill off games and see results through. But today we showed that we are more than capable. Our early goal was not enough for the players so instead of small play in the middle of the pitch, we went out there and got ourselves another goal. Every single player in a red shirt on the pitch today showed the commitment and desire that is expected of a Manchester United player. That is not something i have been able to say all season.
And of course there has to be a mention for a captain of the night, Ashley Young. One of the few players still remaining from the Fergie era, and today it showed. It was a real workman like performance today by Young who was leading the team with fighting spirit. Earlier when the lineups came out, I tweeted that if we won, I would dedicate my Twitter account to Ashley Young for the rest of the season, so here it is. Ashley Young MUFC (@DillanMUFC).
Overall, today’s performance was brilliant and the result even better, but as the season is coming to an end, it is important that we keep this passion and determination for the remaining games. Jose Mourinho has prioritised the Europa League and we cannot let that slip. We need to put in a similar performance on Thursday at Old Trafford against Anderlecht, which would be enough to see us to the semi finals of this competition. Today’s win also means that our top 4 hopes are still alive. We need to continue fighting on both fronts for the rest of the season. Although a top 4 finish still feels slightly out of reach, there is no reason why we can’t keep fighting until the end!
#GGMU