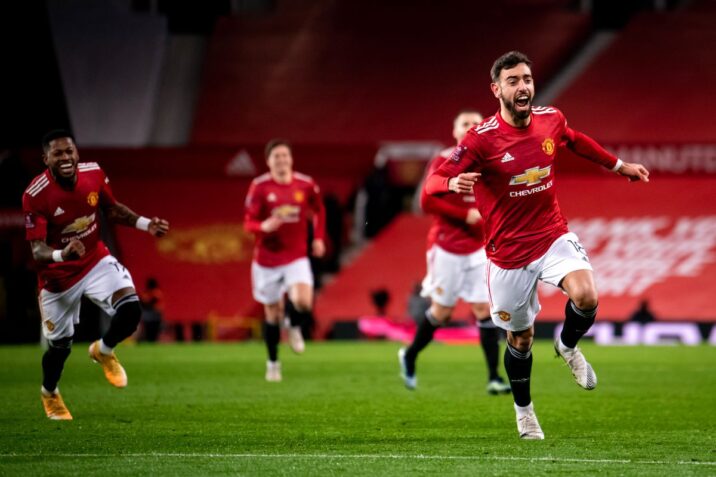 Manchester United retained their comeback king status with a 3-2 win over Liverpool in the fourth round of the FA Cup. This victory sends Manchester United into another home tie in the FA Cup to West Ham. Conversely it maintain’s Liverpool’s 100% winless run against senior teams in 2021.

United characteristically fell behind early as Firmino easily slipped Salah between Shaw and Lindelof and dinked it past Henderson. A very good goal from a Liverpool perspective but a sloppy one from the United backline. United bounced back with homegrown goals either side of half time. Pogba won the ball back both times and Rashford and Greenwood were found respectively and set up the other for their goals in beautiful symmetry.

United failed to keep their lead as they succumbed to another sloppy goal playing out from the back. No fault on the defence but Liverpool cut out Cavani’s attempted layoff to McTominay. From then, Liverpool were slick and cut United apart again with Firmino to Salah and the ball in the net. A totally avoidable goal and a naive one as playing out from goalkicks against such a high pressing team is foolish. Nevertheless, United retook the lead and who else but Bruno Fernandes with a stunning freekick to win the tie.

After heavy criticism for failing to turn up in big games this season, United certainly did that yesterday. Even though they conceded two goals, it was a strong defensive performance. Early mistakes keep happening but it seems to make the team play so I am not sure whether it is a good thing or not! Nevertheless, it has been a good week for United and they have another big chance to make a statement this week. The match at home to Sheffield United isn’t the real challenge but only a win will do. The real test is at the Emirates as Arsenal remain the only team Ole is yet to beat in the Premier League. A game they cannot afford to drop points in.

Some big saves at crucial times but none that were beyond his skill. I feel he was unlucky with both the Liverpool goals. The first was an excellent finish and the second a powerful effort that he expects will be wider than it was. His distribution was decent but I still think he is lacking the commanding presence that De Gea has on the backline. Something that comes with age and experience.

A very solid game. Had a tough ask as Jones would stay central and would have Robertson roaming too. When Mane came on it was surprisingly easier for Wan Bissaka to deal with. Barely gave the Senegalese winger a sniff.

Looked lost for the opener as he tried to track Jones when his main concern should have been Salah. Apart from that he was excellent. I expect his back injury will mean he is rested midweek and Bailly returns but I expect Lindelof to return on Saturday.

Another solid game. One or two rash clearances that didn’t quite work but made up for them.

Could be deemed at fault for the opener but excellent for the rest of the game. Created some big chances and his corners were decent too.

Struggled to get into the game but did improve when Fred came on. I do feel Fred or Matic remain more comfortable as the sole anchor and he must improve if he is to replace Matic long-term.

Another superb and disciplined performance. His mentality and Ole’s management of him have been world class. No one has made more recoveries than Pogba since Darren Fletcher came into the United staff as he won the ball back for United’s first two goals. Something that cannot go underrated.

Such a tidy player. I can’t remember a point when he lost the ball. Looked a bit rusty in the final third but I do hope he starts midweek. Perhaps instead of Pogba who has played a lot of football recently.

Looked dangerous on the counter and made Liverpool pay with an expert finish. Van Persie-esque! The pass to Rashford was brilliant and first time too! Did have to come off as United needed another body in the midfield but certainly a great display.

Brilliant performance. Gave Trent and Williams big problems all game. Stunning pass the Greenwood and a tidy finish to retake the lead. Rashford on the left is far more devastating than on the right or down the middle. And it showed today.

His work rate is first class and when he pressed Thaigo he stopped Liverpool’s possession. Great linkup and almost bagged himself a classy goal but for the post. Was at fault for the second goal and so he doesn’t get anything higher.

Came on and his energy made a difference in the midfield and certainly boosted McTominay’s performance.

BIG. GAME. PLAYER. Came up with the crucial goal when United needed it most. Where would we be without him? Best not think about it…

Man of the Match: Marcus Rashford

His man management has been something every fan can respect and praise. However, his tactics yesterday were equally spot on. Liverpool needed a reaction but had an inexperienced backline and a paceless midfield. Something the counter exposed and runners in behind when in possession. Cavani gave the backline problems that Martial can’t with his movement and strength and Rashford and Greenwood tore through Liverpool on numerous occasions. The midfield was disciplined albeit McTominay struggled but seeing that continue, Ole brought on Fred to help out. He took no chances and brought on Bruno when Mane came on and fielded what could be argued as United’s strongest side. Ole takes cups very seriously but showed he wants the same mentality from his team in the Premier League too in his post match comments. He will want a tidy game and a clean sheet against Sheffield United because United will need all the momentum possible with Arsenal in good league form.