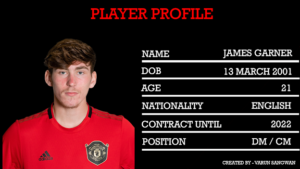 James Garner was one of many United youngsters to have gotten his chance in this Season as Ole Gunnar Solskjaer’s overhaul of the squad continues, with him putting his faith in the youth academy but towards the end of the season he found himself starving for game-time as the addition of Bruno Fernandes and the gaffer’s new found faith in Nemanja Matic pushed him down the pecking order. Thrust into the first team due to injuries to key players – Pogba, McTominay and Matic early in the season, Garner according to me always impressed because he did a lot of running and wasn’t afraid to jump into a tackle. Garner is a player who is intelligent when in possession and often plays the right pass, something which draws comparisons to Michael Carrick.

Even when he was not getting game-time in the first team, for the U-23 team he scored 8 goals in 10 games in the U23 Premier Division 2 as he was instrumental in Neil Wood’s side securing promotion to the first division and also contributed a goal in United’s unsuccessful EFL Leasing.com trophy campaign. Overall, it was a good season for James Garner and it can be said that he has a bright future.

WHAT DOES THE FUTURE HOLD??

A loan spell at a Championship team would do James Garner a world of good as we will finally be able to evaluate him week in, week out and he will get plenty of game time and experience and in the words of head of first team development Nicky Butt  – “will be getting to play men’s football” as he looks to transition towards the United first team.

In my opinion, Garner can be the Nemanja Matic replacement we are looking for. A year or two on loan can have the same effect it had on Dean Henderson as now he looks to challenge for a regular first team spot. With many clubs interested, a loan spell can be the making of him and will help him settle a spot for years to come. According to me, he’s going to be United player for many years to come and it is up to the club to make decisions that are in his best interest.