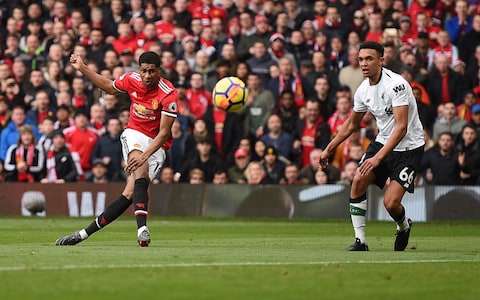 Wow! What a win that was! I’ll take any win over Liverpool, in any fashion whatsoever. This game was the 200th fixture between the two clubs and Jose Mourinho made sure it had Manchester United written all over it.

We beat Liverpool at home in what was a tactical masterclass by Mourinho. He completely bossed Klopp off the pitch. We silenced all the Liverpool, fans and their hyped up squad of mediocre players. Their famous front three who are supposedly one of the best in the world, didn’t get a single shot on target, Scott McTominay dominated the “much improved” Oxlade Chamberlain, Lovren is probably still having nightmares of Lukaku, and Rashford sent Alexander-whatever back to school. No matter how much passion Klopp showed on the touchline, it wasn’t good enough. Because he got his tactics all wrong. That’s how football works. These guys are all talk and have nothing to show for it. Anyway, after my evident out-pour of hatred, let us get straight to the player ratings.

David De Gea – 6/10
The best goalkeeper in the world had nothing much to do because the supposed best front three had no shots on target throughout the game. About the game, there wasn’t anything he could do. It was a near post goal but Dave didn’t see it coming, no one did.

Antonio Valencia – 7/10
Tony didn’t do much wrong and was good at keeping Mane in check. However, there were a lot of crosses from the right flank and it should have been dealt with better. If Liverpool were more competent, the crosses might have cost us.

Eric Bailly – 8/10
What a pleasure to have this man back! Imagine being the best defender on the pitch despite scoring an own goal. He was everywhere and made sure the Liverpool attack were no where. The brilliant piece of skill he did on Salah made all of us forget about the own goal!

Chris Smalling – 9/10
Smalling was a very different player yesterday. He was far more aware and knew the movements of all the attackers at all times. He was first to every challenge and didn’t back out of anything. He was there to make life miserable to their “False 9 Bobby Firmino” and that’s what he did. Perfectly.

Ashley Young – 9/10
This guy was the best of the back four. Surprising. Young completely nullified Salah and didn’t give him a whiff of the ball. The best player in the league, apparently, could do nothing on his flank while an old and on-the-verge-of-retirement Ashley Young welcomed him to Old Trafford. Young did his job perfectly, by not leaving the half too much and mainly focused on the defensive duties.

Scott McTominay – 8/10
This guy is turning out to be an extremely valuable member of the squad. After driving Hazard off the pitch, he had a much simpler task in hand with Ox. No surprises that he tamed the Ox like a little calf.

Nemanja Matic – 8/10
Matic was the usual rock in midfield that we have grown so fond of this season. He is an indispensible part of the squad and he showed us why, for the umpteenth time, against Liverpool. The toughest job of the summer will be to find Matic’s replacement.

Juan Mata – 7/10
Mata was a great orchestrator in midfield. He pulled the strings and set up runs on the flanks and even the middle. Ideally, he should have scored and put us three goals up. But he did not let us feel the absence of Pogba and did a great job.

Marcus Rashford – 10/10
The man of the moment! His playing did the talking on the pitch. Rashford ended Alexander-Arnold’s career before it even began, leaving him for dead for the first goal. He was extremely clinical and scored from both the chances he got in the game. He was also in the perfect spot for the second goal. The spot for the left wing is going to be a tough one now.

Alexis Sanchez – 7/10
Alexis was great, but defensively. He wasn’t too threatening going forward but what he did well was winning possession and restarting the attack. He’d surprise the Liverpool attack by his presence at the back and ultimately win back the ball. Despite contributing defensively and getting an accidental assist, I want to see him attacking more and scoring more goals or at least setting up more goals.

Romelu Lukaku – 9/10
Lukaku has improved tremendously in the last few weeks. Now it remains to be seen if he maintains this form or not. He gave Lovren a really bad times with his threatening runs and even provided an assist for the first goal. He also helped set up the first goal. He was unbeatable in the air and I hope to see many more class performances from him.

Substitutes:
Marouane Fellaini – 7/10
The Fellaini substitution was a great one though it raised some eyebrows at the moment. Fellaini was primarily sent in to go and win the long balls in the area and he did that job well.

Anyway, that’s the player ratings for this great game. Let us know what you think or how you thought each player fared. On to Sevilla!

P.S – When I say no shot on target from the front three, I mean proper chances. Not half attempts on goal.